Italian recipe: how to cook a tasty and coloured chicken

Italian recipe: how to cook a tasty and coloured chicken 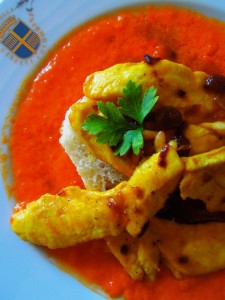 The recipe was enjoyed by everyone, in fact it was greeted with enthusiastic acclaim during the night of the falling stars and for the dinner in occasion of Casato Prime Donne Award . It is a new recipe, it was conceived by Antonio Corsano, who based the idea on traditional Renaissance Tuscan cuisine with its combination of savoury and sweet flavours, the use of spices and especially the inclusion of tarragon which is present in many foods from ancient Siena times.

Preparation of the tomato sauce: Wash the tomatoes then remove their insides, bring them to boil in a saucepan of salted water. When they are ready, put them in a food processor and add the tarragon leaves, basil and a little olive oil. Reduce to a fairly smooth sauce. Put the sauce in a saucepan and cook over low heat adding the cream and butter. The sauce is ready when it takes on the consistency of a soft batter.

Preparation of the Chicken: Open the chicken breasts and split them into eight fillets, flour them and fry in a pan with 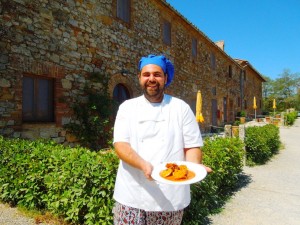 the oil and the onion. When the chicken has just acquired a golden colour add the saffron (previously dissolved in a glass with a splash of warm water), the raisins with the vinsanto and the pine nuts. Serve the dish on four plates by first placing a spoonful of the tomato sauce (which we previously prepared), then on top put small slices of hot toast and on top of that two chicken fillets for each person. Before serving, sprinkle with the mix of aromatic peppers.

N.B. The tomato sauce can be replaced by a non-spicy red pepper sauce