in Farm experiences
by Donatella
0 Comments
0

Ricciarelli: the recipe for the typical Christmas cakes from Siena

The home made freshly baked ricciarello is the nicest cake in the world. It has a taste of Tuscany, of Christmas, of local traditions and affection

Nothing at all to do with the commercial ones! 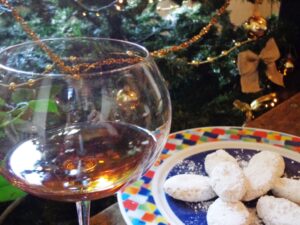 Traditional, easy and fragrant, it helps you rediscover the pleasure of almond paste. The ricciarello is the Sienese Christmas cake and since 2010 it is a product protected with the IGP certification. A traditional delicacy from as far back as man can remember. It seems that the oldest recipe is a document in a convent in Buonconvento  20 km from Fattoria del Colle. Its name has a legendary source and come s from the Crociato Ricciardetto della Gherardesca who it seems brought the recipe from theMiddle East.

However the word ricciarello appears only in the 19th century so centuries and centuries after the crusades. Most surely the use of almond paste came about in the houses of the rich Sienese bankers from the southern part of the Mediterranean, prior to the 15th century, because from that era one was served  “marzapani alla costuma senese” or “morzelletti” probably prepared in convents.

The most appropriate wine for this very Sienese delicacy is the Vin Santo, the most traditional dessert wine in Tuscany. Want some proof? As soon as it will be possible again come to Fattoria del Colle and you will find both!

Read the recipe below!