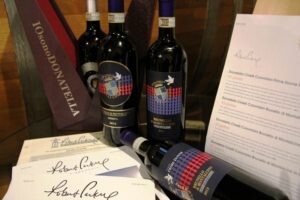 Monica I love you!

It is easy for a wine producer to love a wine critic who appreciates their wine. But it is even easier to love a wine critic who appreciates the wine and sees mirrored in it the producer’s personality. For this reason I really adore Monica Larner the Italian reviewer for Robert Parker Jr- Wine Advocate .When she wrote <<….because of her steadfast dedication to all things Tuscan and wine-related, she is one of the figures I admire most in today’s world of vino italiano>>  I nearly fainted. 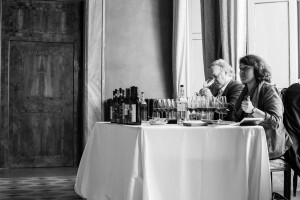 Monica was born into a family connected to wine and cinema. Her father Steven Larner, of whom she writes with great love, has been director of photography for very successful films and TV productions, while her brother is wine maker in the family estate in the Ballard Canyon, in Santa Barbara, California and has passed the last few months living the nightmare of the California wildfires.

Monica has had on-hand experience regarding grape growing, including the pruning process. She has in other words a past as a pure journalist with collaborations with La Repubblica, International Herald Tribune and Corriere della Sera, but at the same time a real “grape grower”. In 2003 she began working for Wine Enthusiast and judging Italian wines and getting famous for her great nose able to discover emerging wines from regions such as Etna. 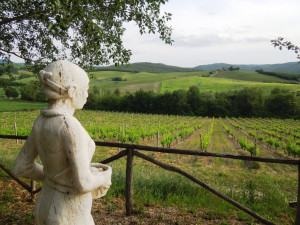 In 2013 Robert Parker chose her to taste and judge Italian wines for his Wine Advocate, from that moment Monica become a real star among the world wide wine critics. She is one of the 20 most important wine critics of the globe. She is a person with strong ethics:  in 2013 she decided not to taste the wines made by a declared racist. She doesn’t hide her aversion to Donald Trump’s decisions and her support to Oprah Winfrey and to movements regarding female. At the same time Monica has a great sense of humour and her Facebook page is full of pictures of her dog Tappo and of herself in unusual clothes such as  “Dama del tortellino”.

To have the esteem of someone like Monica Larner is for me motive of great pride. Her comments are precious both when she is rewarding me, and so opening the doors of great wine buyers such as the Canadian monopolies, but also when they are less positive and they make me reflect about some choices in style.

To be a wine producer is like being music conductor: this music s written by nature but must be interpreted as part of the civilisation where we live. It is a wonderful job that brings you close to nature and to the local specificities but at the same time it opens your eye wide to look at the world.

Monica I Love you!

According to Monica this wine reflects my sunny and warm personality. Modern.

A robust and richly textured wine with dark fruit flavours of prune, blackberry and black currant. Ample spice, tobacco and tar fill in the rear.

This wine shows warm aromas of ripe fruit, savoury spice, tobacco and grilled herb. The wine is generous and full. There is plenty of primary fruit at the back that glues all these various elements firmly in place. The fruit is subtle and delicate in this vintage.

This wine represents a special selection from a single barrel. It presents extremely balsamic notes of rosemary, dried ginger and a very precise note that smells just like exotic mint. Monica happens to love balsamic notes in  Brunello, and indeed they are one of her very favourite characteristics of this Sangiovese from Montalcino.