Montreal is a city for gluttons and for Cenerentola

Montreal is a city for gluttons and for Cenerentola Montreal is the city which, in the whole world, has the highest density of restaurants per inhabitant, and wonderful restaurants they are too, and what wine experts!!! So many sommeliers and an expertise regarding the wines from all over the world. Montreal unites American organization qualities to French tastefulness. The result is out of this world, a beautiful city, easy to live in and a glutton for nice food. Because the high rated restaurants are smaller and reasonably priced than those in New York, but have such a high quality level in the service and in the kitchen. The preparation of food is “ a vista” so quite visible, in quite small kitchens with respect to the number of meals prepared and the amount of dishes on the menu. Apparently everything is done on the spot with fresh ingredients.

Among the chefs that I have met two shine like real stars: Graziella Battista and Patrice Demers. Graziella was born in Canada to Italian parents, she studied 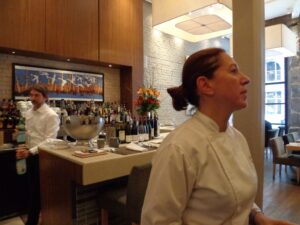 Montreal-Graziella Battista in her restaurant

Economy to then find out that her passion was for haute cuisine <<the concept of organization is the same among the hobs on the stove as in high finance>> she says smiling, then she explains how she has contaminated different cuisine cultures so as to create her own dishes.

Patrice Demers was born a patisseur and has written a book regarding desserts which seems to be a milestone for sweet Canadian cuisine. He is a young genius of the stove who combines creativity to a practically mathematical precision in dosing ingredients, coking times and temperatures.

But the list of places I have visited with the staff from Société Roucet, my importer, is much longer: “Le Local”, “Les 400 coups”, “Kgp” ….Everywhere do you find super experts and real wine lovers and surprise surprise the Cenerentola DOC 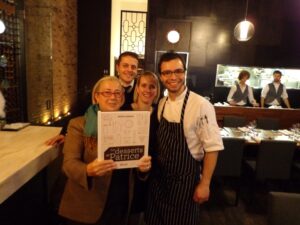 Orcia is the most requested. In spite of those who see no future for this new denomination, here in Montreal the applauses (and the orders) were unanimous. Not so much that Brunello was shaded but, however shining in its own light. Is it here that maybe the young Cenerentola (which means Cinderella) will find her Prince Charming?