The Montalcino pilgrimage to Riga

The Montalcino pilgrimage to Riga

The Brunello wines, myself and all the other producers from Montalcino arrived in Riga on Monday evening at 10.30pm after a day of wine tasting in Vilnius and a 4 hour bus journey. 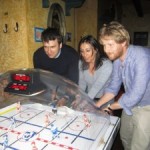 We were very tired following a very busy day but we had been invited to a pub to celebrate the birthday of Alessandra Mililotti Ciacci, an important member of the Mocali wine producer family. How could we say no! So we went en mass! The Mocali company was established in 1950 by Dino Ciacci, who was one of the original twenty-five founders of the Consorzio of Brunello di Montalcino. From him the Company has been passed down to his younger relative Tiziano Ciacci who is the current owner and husband of Alessandra.

She is a wonderful vivacious woman, she has a very sunny disposition and is very friendly and she was very keen to celebrate her birthday with all of us in the pub. We all had a lot of fun because we found a strange kind of table football game in the pub – it was like table football, but with hockey players in place of footballers. All of us had a great time playing on this game, both men and women, working up a great sweat and having a lot of fun. With lots of sips of beer as the goals were scored one end and then the other. After that it was the turn of the Pool table and there were even more outrageous performances during that tournament. How we all laughed!

The next day we returned to being serious wine professionals when we presented the seminars during which we explained about the territories in which our wines are produced and the wines themselves. The hall was almost full with lots of delegates and journalists interested in the Brunello wines. The tasting was less crowded than that of Vilnius, the day before, but we did make some good contacts. The facial features of the inhabitants of Riga are not typically Russian but seem to be more similar to those of Scandinavian people.

After the wine tasting there was another situation which caused a lot of fun, there were only two rooms for us to get changed in: one for the women and one for the men. By 6pm we were back on the bus on our way to Tallin. The ‘school trip’ atmosphere continued with everyone swopping more fun stories, anecdotes and jokes. For those who have enjoyed seeing the images of the people from the Comune of Montalcino which are currently to be found on the internet it is all thanks to Bianca Ferretti, Fabian Schwarz’s wife who was there with us. Congratulations Bianca, good job!
Violante Gardini Export manager for Donatella Cinelli Colombini