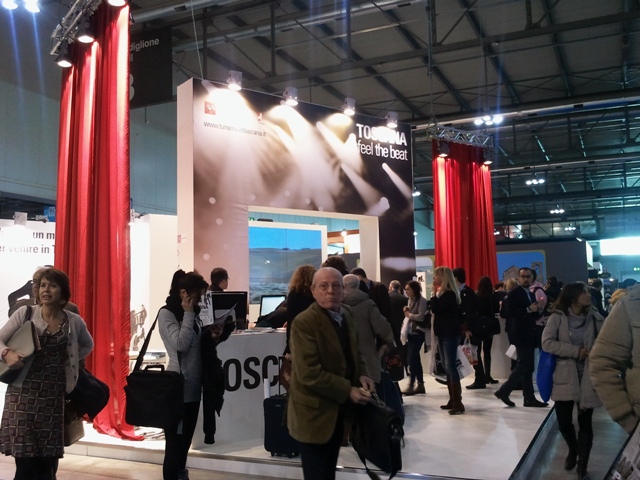 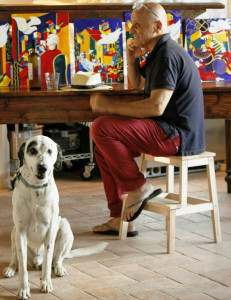 Every year the fist Italian winery with an all female staff celebrates the winner of the Casato Prime Donne Award with an art piece. Sculptures, photographs, and also intangible artistic installations come to life in the winery and among Donatella Cinelli Colombini’s vineyards, who since this year is also the president of the Award and of Donne del Vino association.
Roberto Turchi work of art “The Dove’s Flight” is a performance of digital images that transforms the new vats room in an art space (with the collaboration of Giuseppe Sanfilippo, Tommaso di Ronato, MCM Service)
The 2016 winner Chaimaa Fatihi, peace activist, has written a dedication that has been placed at the entrance of the vat room <<To all the women in the world, who know how to be strong and never give up in the face of fears, prejudices, hatred and violence>>. Inside, among the new bare concrete vats, just arrived from France, flies Roberto Turchi’s dove, a symbol of peace but also of the Award and of the cellar that finances it. “The Dove’s Flight” the flight of the dove that is the protagonist of the painted history that a sophisticated technological system projects on the conical vats, 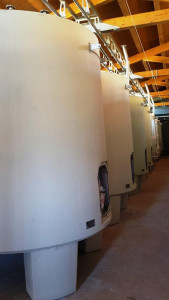 wine-making gems surmounted by steel fullers.
Roberto Turchi painter, wine expert, innkeeper, interior designer of an absolute and visceral identity of Montalcino territory created something dynamic and engaging that, for 3 minutes, takes visitors into the world where painted and real images, colors and sounds, emotions, and lightness mix together. An experience of Montalcino that no one had ever done before. Extremely intense colours juxtaposed, Turchi’s distinctive strokes of a very personal and contemporary poetic which nevertheless sink its roots in Sassetta and Sano di Pietro Sienese XIV century. The Montalcino images break down into a cubist and at times metaphysical game and later becoming a tale with a remarkable evocative strength.

Irony, dreams and real scenes in a story with important historical references for the 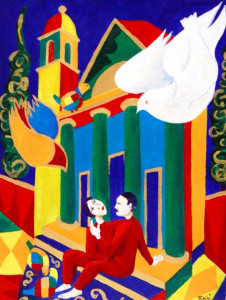 town of Brunello and Donatella Cinelli Colombini personally. In the Fortress of Montalcino, the last bastion of free Italian municipality until 1559, begins the flight of a dove by Roberto Turchi. A place that Giovanni Colombini, Donatella’s grandfather and then mayor, had it restored bringing it back to its ancient splendor. The dove keeps flying towards Montalcino City Hall, for seven hundreds years heart of private and public life of the people of Brunello. The dove keeps flying and exit the building brushing by the Church “Madonna del Soccorso” that commemorates the appearance of the Virgin to Don Garcia from Toledo that saved the town from a fierce siege. Finally the dove arrives at Casato Prime Donne during the grapes harvest. A performance that by Roberto Turchi that shows an extraordinary narrative skills but also and incredible ability to adapt to modern technologies. <<I bet on Roberto’s sensitivity in reinterpreting spaces entrusting him with the task of giving an artistic content to an industrial space>> said Donatella Cinelli Colombini << I knew it would be a difficult task, only a person who is familiar with the world of Brunello and has a real artistic flair, could succeed and he succeeded creating something new and unique >>. Everyone who loves Brunello and its territory will find here the magic that renews his feeling.