Italian extra virgin olive oil from Trequanda is a super-oil

Italian extra virgin olive oil from Trequanda is a super-oil

The Trequanda area, where Fattoria del Colle is found, has always been renowned for its exceptional extra-virgin olive oil and the 2012 produce is very good 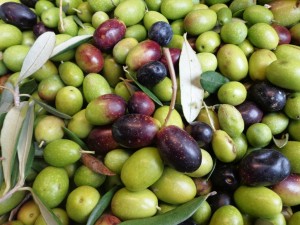 The quality of the oil depends 50% from the soil and microclimate of the olive grove, a mix of permanent elements such as ex position to the sun and some variable elements such as amount of rainfall and temperatures. Connected to the production area is also the presence of the malevolent oleic fly, who lays its eggs inside the olives in so ruining the quality, or obligating the farmers to use pesticides. Trequanda does not have this problem; its olives are sound by nature because the fly does not arrive as far as this region 404 metres above sea level 25% of the quality of the oil come s from the “cultivar” (variety of the olive trees) and from the cultivation, in other words choices made by the farmers. It is very important when and how the olives are picked, and that they be transported to the mill the same day that they are picked without being squashed. 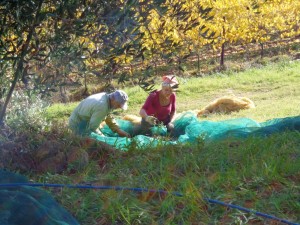 them in baskets  tied around their waists. It was a very hard job because up until 15 years ago in November it was very cold. Now there are hand held electrical rakes which make the olives fall on nets laid under the trees so as to collect the olives gently without them being harmed through hitting the ground. From the nets the olives get collected in crates, with openings which enable the olives to “breathe” in which they get transported to the olive mill.

The remaining 25% of the quality of extra virgin olive oil come from the equipment used in the olive mill, the expertise of the master olive crusher and the preservation. Ours is Paolo Bindi from the Frantoio 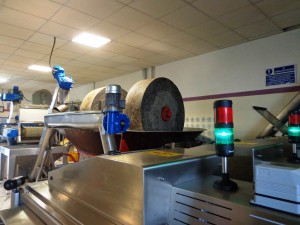 Sant’Angelo in the small hamlet of Castelmuzio. Second generation artisan in a laboratory that began its activity in 1983 with the classic system of grindstones, still visible today in the centre of the new continuous system able to work at under 27°C in temperature (cold pressing) and able to separate the produce of every olive grove.

This year the olive production was patchy: there were olive trees full of olives and next to them trees with nothing at all. The best quality came form the most humid areas; here the olive trees suffered less because of the drought. On the whole the olives looked well formed with a consistent and hard pulp so the yield has been good at around 16%.
The extra virgin olive oil from Fattoria del Colle will be preserved in stainless steel containers under nitrogen in a small area where the temperature stays around 15°C. The oil will often be decanted and does not get filtered.
The quality of the 2012 oil is very good, it has an aroma of grass and artichokes. In the mouth the taste is intense, slightly 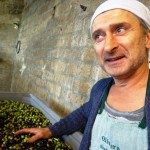 pungent and at the table served on coke vegetables one can even do without salt.

The variety which I think has come out best is the monocultivar with correggiolo-frantoio olives. We also produce though an extra virgin olive oil with only moraiolo olives. Both of these types were picked in October before all the rest. At Fattoria del Colle we produce also DOP “Terre di Siena” blend of the two varieties. In all 15 q sold nearly all on the farm to visitors.

A couple of words more about the master olive crusher that we have chosen after having tried 5 others. The olive mill Sant’Angelo is a pleasant place: the brand new shiny stainless steel 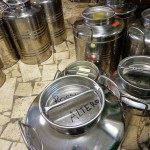 equipment are positioned near to the traditional fireplace, the granite sink dating back to the beginning of the 20th century and the office furnishings built with pieces of old farming machines. The aroma there is wonderful, very different from many other olive mills where they practically smelt bad, here on the other hand there is a delicious perfume. Then there is Paolo Bindi’s passion, the love for his work and the friendship with those who take him their olives. We will hear more about him!