Story of a Traminer emigrated to Tuscany and of its passito

Story of a Traminer emigrated to Tuscany and of its passito 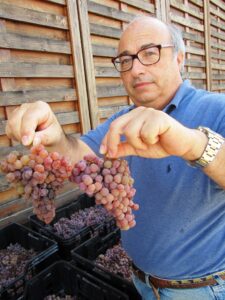 One might think that it is an experiment or the desire for diversity at any cost, but in reality it is something more prosaic and less exceptional.
Everything began about 35 years ago when following a trend regarding wines with lower alcohol content a group of important Tuscan vineyards decided to use white grapes in the Chianti area to produce “Galestro”, a simple and easy to drink white wine destined to be matched with fish recipes and for the summer heat.
The years go by and my father in law together with his wine maker, who came from Veneto, this type of wine does not convince and they do not like it so how to use the Trebbiano grapes still present at Fattoria del Colle in Trequanda? After a careful consideration, and some discussions the winemaker proposes to plant Traminer to create a white wine that added to the Trebbiamo already existent the perfume of the new Traminer just arrived.

So the first bottles of “Sanchimento” arrived, the new white wine that gets its name from the Traminer Vineyard planted just behind the crape on the farm dedicated to San Clemente (pronounced in local slang as San Chimento).
With the passing of the years the old Trebbiano vines produced less and less, and slowly diminish until there are no more and the Sanchimento becomes a white Tuscan wine made only with Traminer grapes.
More delicate and austere than the Traminer born the other side of the alps, tank 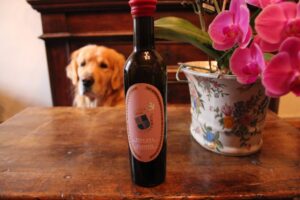 to the large difference in day and night temperatures which characterize the Trequanda area, Sanchimento is a structured white, fine, with excellent aroma which is perfectly matched with white meats, fish and entrees.
The yield per hectare is very low, from 2,5 to 3 tons per hectare and the bottles produced are never more than 5000.
But the story dies not finish here.
Making the most of the passion and ability of our cellar master Barbara Magnani, regardless of Donatella’s op position as she prefers the red wines from the Tuscan tradition, and with my complicity, for the last three years we have been producing a very small amount of passito using Traminer grapes which have been exposed to the sun in crates and then vinified in stainless steel vats.

A dessert wine that is very different from our Vin Santo but which reminds us, with its aroma and its delicate character, how the sun can give complexity and pleasantness to the grapes and to the wine. No Mediterranean sagging, the passito is net in its varietal perfuse, harmonic and most of all lasts at length in the mouth jus like a pleasant memory.