With love from Norway to Fattoria del Colle in Trequanda 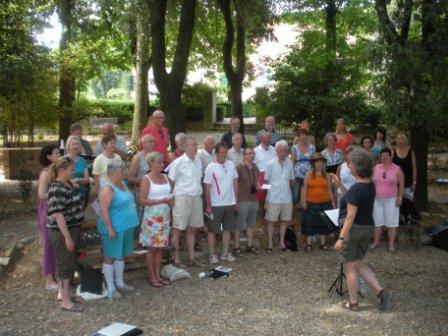 With love from Norway to Fattoria del Colle in Trequanda

The polyphonic choir, who from Norway has chosen Fattoria del Colle for its annual concert abroad is called Con Amore It is made up of 50 singers directed by Ida  Baalsrud and is called Con Amore because of the passion for music, for singing and for Italy of its members. The have waited a whole year for this journey to Tuscany and they have rehearsed for 6 months. They have visited Siena and Pienza, they rehearsed at Fattoria del  Colle inside the 16th century chapel San Clemente and in the woods of the traditional games, to be able to give exhibitions in Foiano della Chiana and in Monte San Savino. For Foiano della Chiana, in the piazza della Collegiata they chose a repertoire of well known music by classical authors dedicated to food, and wine and beer. For the Chiesa della Pieve in Monte San Savino on the other hand they chose sacred music. On the last day they sang among the barrels for Chianti Docg and Cenerentola Orcia Doc, they sang “Five reasons to drink” hoping that the good vibrations of their singing would make the wine even better.
They even sang Happy Birthday to a guest who was celebrating his birthday and a serenade for a couple on their honeymoon.
Thank you so much for let us be part of your wonderful passion!