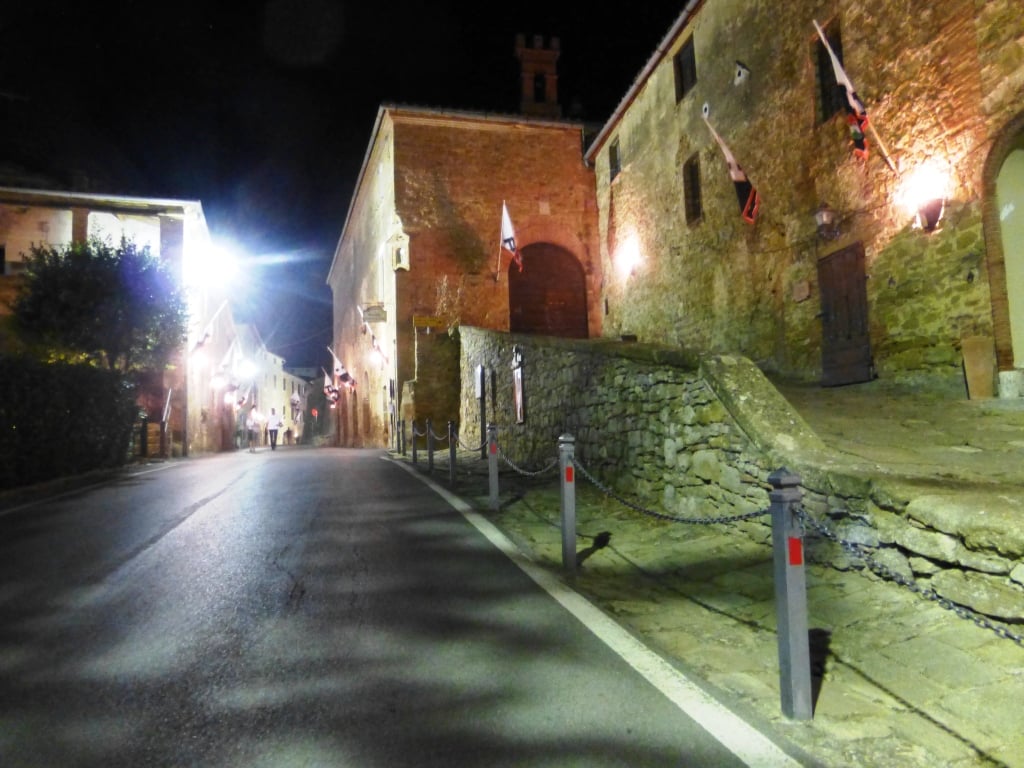 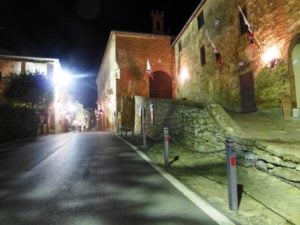 Two km from Fattoria del Colle there is a sign indicating the entrance to the territory of Montalcino. I feel at home, although originally my municipality was not so big because it expanded with a merger only in 2016. It is a fact that in Montisi (6 km from the Fattoria) now they say here in Montalcino>> and I listen to them ecstatic.
Montisi is perhaps the most intact medieval settlement in Tuscany.

A small gem built on the remains of the Cacciaconti castle with narrow streets that climb up one inside the other among beautifully restored stone houses. It is so pretty that it looks fake but it is not… the Pieve della Santissima Annunziata (XIII century) with a beautiful altarpiece by Bartolomeo (1496), the Church of Santa Flora and Lucilla, the ‘Oratorio di Sant’Antonio Abate with the small museum that testifies how, the poor people of Montisi could survive by helping each other. In these places I have a beautiful personal memory.

MONTISI A PERSONAL MEMORY WITH ABSOLUTION

I was little more than twenty and studied medieval Sienese goldsmiths. As in each of the things that I do, even in that case I had thrown myself into the adventure with all myself dragging my husband, then fiancé Carlo Gardini, in an interminable pilgrimage between museums and churches to count chalices, reliquaries, and so on …

In Montisi there was a processional cross and I went to examine it and photograph it. Seeing the patience with which Carlo helped me, the priest said to him “Were you in Rome for the Holy Year? Did you take up the plenary indulgence?” Carlo did not expect it and was amazed “no” he answered with a thread of voice “it doesn’t  matter>> said the priest “ kneel because I’ll give you absolution, I can see that you are a good boy>> and blessed him. To me nothing, he obviously understood who was the tender one between us.

Montisi is like this, it looks like any village but instead is full of magic. Here is the headquarters of the Piccola Accademia di Montisi founded in 2013 by Bruce Kennedy, creator of internationally renowned concert harpsichords and owner of the world’s largest collection of these instruments of the XVI-XVIII century.

It is the chance to play these harpsichords that attracts musicians from all over the world to the Master Classes held in August. Still in the music sector the festival “Solo belcanto” which is headed by Silvia Mannucci Benincasa descendant of the family of Santa Caterina, who at the end of August organizes courses and concerts of opera of extraordinary quality. 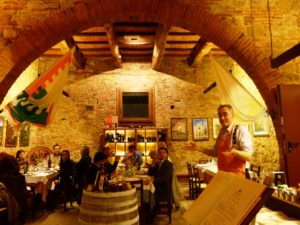 Don’t be surprised, Montisi has 400 inhabitants but it is a place where anything becomes legend. At the Barrino, l’ombelico del mondo Gianluca Monaci, Ambassador of Champagne and great connoisseur of the best bubbles, it is possible to make dream tastings. The restaurant looks like a normal country bar … and instead it is Gianluca’s merit (or fault) if Montisi has the world’s largest per capita sparkling wines consumption. It is a cult place for lovers of sparkling wine. The common friend Marcello Lunelli enologist and co-owner of the winery Lunelli of Trento will confirm word for word what I have written. To give you an order of magnitude, 280 bottles of Ferrari were consumed in one of the evenings dedicated to him.

But this is not enough to complete the picture, I could tell you about the hot air balloon flight that starts from Montisi in the mornings of summer and allows you to look at one of the most beautiful agricultural landscapes in the world in absolute silence. I could tell you about the Taverna di Montisi where Roberto, philosopher, chef, multilingual serves a salad of mixed legumes chosen within 50 km between the organic excellence and cooked separately in a perfect way. I hate legumes but I especially go to Roberto to eat them because his are another thing. Not for nothing else has the Slow Food snail. In Montisi there is the wine shop “Vitis vinifera” of one of the greatest Italian enologists, Maurizio Castelli and his wife Antonella …. it is a pity that it opens only a few days each year. 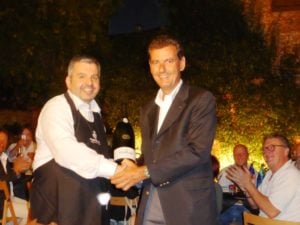 MONTISI WHERE EVERYTHING IS BETTER THAN YOU EXPECT: ORCIA WINE, GARLIC, SAFFRON AND MILLIONAIRES

Montisi does not produce Brunello or Rosso di Montalcino but produces Orcia DOC wine, saffron, garlic and white truffles, extra virigin olive oil… not bad, right? This is Montisi, a village where everything is more than it seems and happens to have breakfast at the bar together with a person who looks like a farmer, still covered in dirt, and then discover that he is a London financier who keeps his plane in Perugia to go back and forth from the city. But deep down this is the beauty of Tuscany, restoring beauty in life, and Montisi succeeds.