Travel to Italy: the floor of Siena Cathedral, Tuscany

Travel to Italy: the floor of Siena Cathedral, Tuscany

The floor of  the Cathedral of Siena is unique in the world, it is almost like a visual bible of unique images: it contains more than 60 square sections all inlaid with mythological and religious subjects and was created over a period of seven centuries. 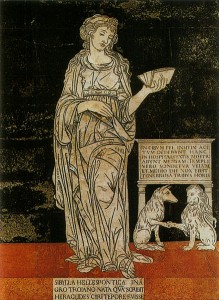 A great work of art which is connected by the shared theme of Salvation. To create the images the artists used various coloured marbles and highlighted the contours of the images by means of incisions filled with dark pitch. The overall effect is spectacular. It is the largest floor to be decorated in this manner in the whole world. It contains images of the Old Testament, created between 1369 and 1547 by great artists of that time including Sassetta, Francesco di Giorgio Martini, Luca Signorelli, Pinturicchio and Domenico Beccafumi. A couple of hundred years later some worn out panels were restored and replaced (this took place between 1780 and 1878) experts such as Maccari and Mussini oversaw the work personally.

Giorgio Vasari described the floor as being “ The biggest, most beautiful and most magnificent floor that has ever been created.” It has been a famous and celebrated work for a considerable length of time, in fact it was one of the important items to see on one of the stages of the Grand Tour, which was a voyage of educational travel across Europe made by young aristocrats of the seventeenth and eighteenth centuries

Unfortunately it is also a fragile floor, which could be damaged as a result of the

The floor of the Cathedral at Siena_

trampling of the feet of the one million three hundred thousand visitors who come each year to marvel at the Siena Cathedral. Because of this, the floor is only revealed for viewing by the public for two months every year (from August 18 to October 24) and then it is returned to invisibility under protective panels. At the moment it is open. Currently, is also possible to admire the inlays in the hexagon which is located under the dome of the Cathedral, in the space next to the altar and the Siena Cathedral Floor, the Sienese Wolf can be seen between the symbols of the city transept. Visitors even have the chance to see the apse where

the wooden marquetry by Fra Giovanni da Verona, and frescoes by Domenico Beccafumi are visible. In other words, although a visit to Siena Cathedral is always exciting because of the enormous wealth of works of art which it contains, it is even more important to visit it before 24th October because of the additional breathtaking works which are on display during this period.