in Vines and wines
0

The Bertarelli’s are italo-swiss; they are industrialists in biotechnologies with a passion for sailing and wine which brought them to Montalcino 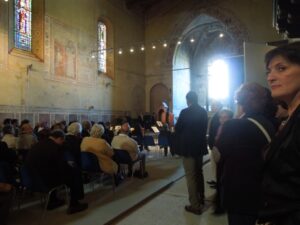 Ernesto, the genial leader of this industrial group, was mentioned in newspapers al lover the world because of two spectacular victories in the American Cup, the most prestigious sailing competition in the world, he won with his boat Alinghi. In charge of the wine investments is Ernesto’s uncle (his mothers’ brother), Claudio Tipa with the wineries Grattamacco in Bolgheri, Colle Massari in Montecucco and recently, Poggio di Sotto in Montalcino. It is in fact this new arrival on the Brunello hill which has opened up a scenario of new collaboration with the involvement of the “Fondazione Bertarelli”. The first step has been this concert “Sacrificio Musicale di Johann Sebastian Bach” which took place in the Chiesa di Sant’Agostino on May 4th 2012 with all of the Montalcino inhabitants and producers as guests.

The concert, in a new key of interpretation by Hans-Ederhard Dentler, was done for the first time in Tuscany. This composition dedicated to the king Federico II di Prussia and evolves in two fugues and ten canons with three and six voices. 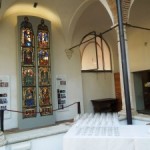 This sophisticated concert has been the best way to introduce the family to the Montalcino community and to become part of it. It also gave

Maria Iris Tipa Bertarelli and Claudio Tipa the opportunity to illustrate the activities of the Fondazione Bertarelli. All of the Montalcino population hopes in a larger help from the Fondazione in the renovation of the Chiesa di Sant’Agostino. For the concert it was cleaned and vacated, but this is not enough to recreate its splendour of long ago. There are no tiles on the floor, no lighting and no heating…. To see the frescoes by Bartolo di Fredi covered with protective sheets to impede the deterioration, is really sad, and everyone hopes that the Bertarelli family will seal their arrival in Brunello land with an intervention which will leave a sign for history of art books but also for the hearts of the men and women in Montalcino and all those who love the village.

The 14th century Church of Sant’Agostino has a particularly troubled history. It was born with the Augustinian convent to which the two cloisters are bound in the 16th century.
Between the end of the 18th century and the beginning of the nineteenth, in the era of the French occupation and of the Viva Maria, it was used as stables. It stayed in a state of abandon until my grandfather Giovanni Colombini had it repaired and opened up as a place of worship around 1940. Every inhabitant of Montalcino has a personal memory of Sant’Agostino, weddings , first communions, funerals.…. the rector Don Guido, uncle to the new mayor Silvio Franceschelli, the last bishop Vescovo Staccioli and his preaching always full of humanity …

This Church needs a new guardian angel and everyone hopes that he has arrived.

This website uses cookies to improve your experience while you navigate through the website. Out of these, the cookies that are categorized as necessary are stored on your browser as they are essential for the working of basic functionalities of the website. We also use third-party cookies that help us analyze and understand how you use this website. These cookies will be stored in your browser only with your consent. You also have the option to opt-out of these cookies. But opting out of some of these cookies may affect your browsing experience.
Necessary Sempre abilitato
Necessary cookies are absolutely essential for the website to function properly. These cookies ensure basic functionalities and security features of the website, anonymously.
Functional
Functional cookies help to perform certain functionalities like sharing the content of the website on social media platforms, collect feedbacks, and other third-party features.
Performance
Performance cookies are used to understand and analyze the key performance indexes of the website which helps in delivering a better user experience for the visitors.
Analytics
Analytical cookies are used to understand how visitors interact with the website. These cookies help provide information on metrics the number of visitors, bounce rate, traffic source, etc.
Advertisement
Advertisement cookies are used to provide visitors with relevant ads and marketing campaigns. These cookies track visitors across websites and collect information to provide customized ads.
Others
Other uncategorized cookies are those that are being analyzed and have not been classified into a category as yet.
ACCETTA E SALVA