Cardoons in the Val d’Orcia style

in Vines and wines
0

Cardoons in the Val d’Orcia style

The most frequent recipe in Val d’Orcia is the winter one for cardoons, even though in Montalcinowe use the same recipe for celery which we eat 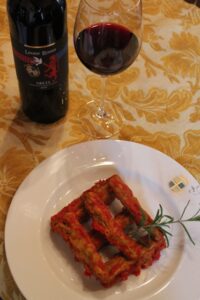 Cardoons are among the tastiest and most refined vegetables that can be found. The term “gobbo” is used mainly in Tuscany while in Veneto it becomes “cardo” and in Nizza Monferrato “cardo-gobbo”. This is a wild artichoke, beautiful to see, in fact its leaves and flowers dominate the damasks , brocades and two pile velvets from the 17th and 18th century.

In the kitchen it is the king of vegetables and here below I propose it in a typical recipe from the Tuscan countryside. “Gobbi rifatti nel pomodoro”. This can be used as an entree or as a main dish, especially for vegetarians. It is perfectly matched with a medium wine like the Leone Rosso Doc Orcia. 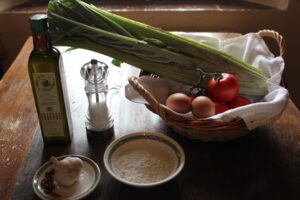 Wash and clean the cardoons and remove the outside stalks. Scrape the stringy bits from the softer stalks then cut them into 4-5 cm segments. Then put hem to boil in plenty of salted water for  2-3 hours, until they are soft when prodded with a fork. Drain them then leave them to cool. Coat them in flour, then in beaten egg and fry in very hot extra virgin olive oil until golden all over. Remove from the pan and dry on absorbent paper.

At the same time peel the tomatoes after having scalded them in boiling water. In a pan lightly fry the garlic thinly sliced and a little peperoncino, in the extra virgin live oil, as soon a sit begins to colour add the peeled tomatoes roughly chopped. Add salt and cook over a low flame stirring continuously. For those who love stronger taste sit is possible to add some tomato concentrate diluted in water. When the tomato sauce is thicker add the cardoons and leave them to cook so that they absorb the sauce. Serve hot.