Wine and music at Casato Prime Donne in Montalcino

Wine and music at Casato Prime Donne in Montalcino

On Sunday May 26th great wines, great music and great images from the land of Brunello at Donatella Cinelli Colombini’s winery for a “sensorial” Cantine Aperte-Wine day 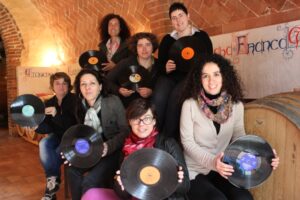 Donatella Cinelli Colombini, who in 1993 invented Cantine Aperte, has decided to renew the formula for the visit among the barrels, transforming it into an experience which exalts and comments wine with sounds, images and obviously tastes. The sound track studied by Bonella Ciacci – a sort of expert in wine and music accompanies 8 wines divided in three tasting spots.

We are at Casato Prime Donne, on the Montalcino hills, facing Siena, and this is where the wine and music trail is. First stop dedicated to Chianti and Doc Orcia from Fattoria del Colle, Donatella’s other winery. Here the music is contemporary Italian pop from the area such as Baustelle, Gianna Nannini and Jovanotti. The next stop in the Vineyard and the vinification areas called tinaia del vento built to produce Brunello with autochthonous yeasts. 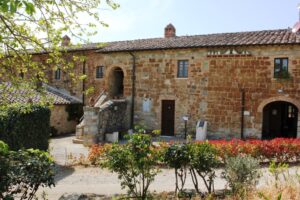 Val d’Orcia Unesco world heritage site: two pieces by Vinicio Capossela together with fresh and fruity wines such as Sanchimento and Rosa di tetto IGT white and rosé. The result is the perception of nature by all the senses. Completely different atmosphere in the barrel ageing area, where the tasting of Brunello and Brunello Riserva from Casato Prime Donne takes place in a meditative atmosphere: dim lights, candle lit area, music by Paolo Conte chairs for taking a seat and relaxing tank to the suggestive ambiance.
So wine opens up to new scenarios, produces suggestive and intense atmospheres and becomes a unique instrument to get to know the territory.

This is practically a key to understanding the harmonies of a land where man, nature and history are in a magical equilibrium, and in Brunello, as in the Doc Orcia Cenerentola and in the Chianti Superiore this balance is perfectly expressed.