A villa in Tuscany for your holidays in the countryside

A villa in Tuscany for your holidays in the countryside 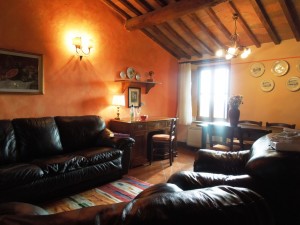 Cenerentola (Cinderella) is the name of an old stone farmhouse on a hill surrounded by vineyards and looking over the spectacular panoramas of the Crete Senesi and of the Val d’ Orcia. The lodging is on the first floor and is divided into two apartments united by a small lodge: San Clemente and Sanchimento can be used divided or together if require by a large group. In total there are five bedrooms, four bathrooms, two sitting rooms with cooking area and a large fireplace.

On the outside there are tables, chairs and sun loungers, so it is possible to eat out of doors and sun bathe, there is even an outdoor Jacuzzi for bathing in front of the immense panorama of the Colline senesi.

Now I want to give you some historic notes. The names of the apartments actually represent the name of the same saint: Clemente I Pope from 88 to 97 AD, also known as Clement from Rome, martyred while on the Crimean peninsula. In old documents this farmhouse is called sometimes San Clemente and sometime Sanchimento. In fact the name Chimento is the archaic form of Clemente who in the Sienese countryside has been continued to be used like many other medieval worlds. In the local dialect Sanchimento becomes just one word.

Also we have a chapel dedicated to San Clemente at Fattoria del Colle that was built in 1592 while Sanchimento is the name of the Vineyard below Villa Cenerentola and of the white wine made with its grapes.