The chef at Fattoria del Colle, Antonio Corsano, prepares for us some “Gnocchi di semolino with white truffle of Crete Senesi” ideal for winter days 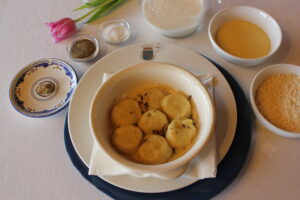 We suggest a recipe which is simple and quick: gnocchi di semolino. These are disks of Durum wheat or, depending on the occasion they can be shaped differently. They can also be called “gnocchi alla romana“, and in fact it is not a typically Tuscan dish but where we are, in southern Tuscany, it has now become a traditional dish coke during cold winter evenings.

Already in the late 19th century this recipe had been inserted in the famous manual Pellegrino Artusi “La Scienza in cucina e l’Arte di mangiar bene” in the section called “trasmessi” or rather those dishes that were to be served between one course and another. But, quite on the contrary it is a rich and delicious dish…you try it and tell us what you think!

Boil the milk and add the flour, slowly while continuously stirring. Add salt, pepper and Parmigiano. Continue stirring until you get 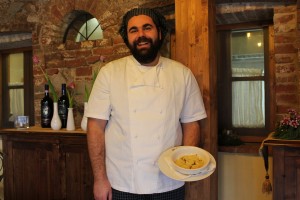 smooth texture. Lay the mixture on a tray and smooth it out with a spatula. Leave it to cool. Cut with a cutter into round shapes and put the disks into a greased Pyrex dish. Put in the oven and cook until they get a golden colouring. As soon as they are out of the oven cover with the truffle flakes and add a little extra virgin olive oil. Serve while still hot.