When Donatella’s father, Fausto Cinelli, gave her Fattoria del Colle, where today one finds the dining room adorned with floral decor inspired by the fin-de-siècle period long ago was a dark area, used for playing table tennis, the kitchen was empty and where the veranda is today was a grassy area which reached as far as the old vineyards. Creating the Osteria was for Donatella one of the first steps to transform the Fattoria del Colle into a refined place, which would be able to speak of an area in an unforgettable way. The brick archways were once again opened up in the hall and the walls were decorated with art nouveau designs copied form a villa in the Chianti Classico area that once belonged to Donatella’s grandparents.

The restaurant was equipped with a kitchen and most of all Donatella took note of the local recipes interviewing the housewives. In the summer evenings, in the villages nearby – Trequanda, Petroio, Castelmuzio, Chiusure – the villagers sit out of doors to chat with their neighbours. That was the time chosen by Donatella present herself with her laptop and asked for recipes. In the end she noted about 40 that were then published in a booklet called Ricettario di Monte Oliveto e Trequanda nelle Crete Senesi.

These recipes formed the first menu of the Osteria at Fattoria del Colle. Through the years other recipes arrived from Sinalunga and from the local hunters…. With some additions from the chef Antonio Corsano and the patisseur Patrizia Cenni so as to create a very typical selection of dishes from the area: zuppa di Trequanda, pappa col pomodoro, ciancifricola, acqua cotta dei logaioli, Pinci al sugo di nana, pappardelle con zafferano e pancetta di cinta senese ……. Many old recipes which are very suggestive. 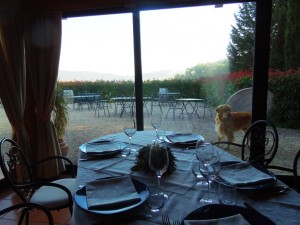 A few years after the launching of the restaurant the veranda was built, here it is possible to eat while being immersed in the green, with the panorama of Trequanda in front of you. The lawn in front has been transformed into a terrace and in the summer it is possible to eat out of doors jus as if it were the courtyard where the farmers ate long ago!

The cookery school, born within the restaurant directed by Helle Poulsen Italo-Danish gastronomist – who has written with her husband Alfredo Tesio14 books regarding tourism and food in Italy, now has a base in one of the farmhouses at Fattoria del Colle. In the meantime the parks have increased in number: the “ boschetto dei Giochi antichi” where often the Osteria puts up buffets , then the “ parco del vecchio frantoio” where upon request, one can organize true folk 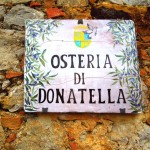 parties…..there are many other things to tell you about, but it is only fair for everybody to come here and discover for themselves the beauty of our tradition.

We are waiting for you!