An event in Strasbourg presents pictures and tastes of Val d’Orcia to the delegates of the Coucil of Europe: town of art, Brunello wine and pecorino cheese 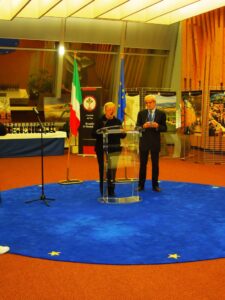 If the European Union is the politic and economic brain of our continent, the Council of Europe is the birthplace of its values. The place where the local autorithies get together to share principles to be spead all over the countries.
Strasbourg is the best place for this kind of institution, the german border is only 10 km far away and the city is a multicultural one and a mixture of the perfect german organisation and the french sense of beautiful with its gothic cathedral with the stained glass window, the pinnacles and the arches. The building of the Council of Europe is the modern version of the same architectural shape. An harmonius complex of huge spaces realized to satisfy their functions.

The director of Consorzio del Brunello and me were there to introduce Brunello wine and its territory of val d’Orcia. The event was promoted by Fabio Pellegrini who was born in Montalcino and is now vice president of Council of Europe .

I have introduced the Brunello wine in English. I have shortened my speech many times being careful to leave the main information. Compared to the other orators I have been listened to with particular attention since the buzz stopped gradually.

When the wine tasting started it was an apotheosis! . All the members of the delegation were enthusiast. They were fascinated by the quality of the wines and by the photos of the land where As soon as Mr Stefano Campatelli told the Estonians that Brunello producers were in Tallin a few months ago they were so enthusiast that they immediately became passionate supporters. I think we have shown one of the most beautiful sides of Italy, in fact the ambassador asked us to improve our relationship and even spoke of using Brunello during the formal dinners.

Satisfied we have just come back to Italy, mission accomplished! 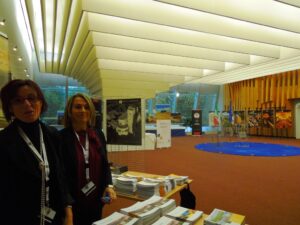