The “Gruppo del gusto”, born in 2002 reunites 118 journalists from 30 foreign nations and interested in wine & food, chooses every year 4 excellencies and the award living takes place during a gala dinner that this year took place at the Città del Gusto in Rome. This is an exceptional year, because of the conjuncture of the Foreign Press centenary and the decennial celebration of the “Gruppo del Gusto” coordinated by Alfredo Tesio.

So this event was such a success, as never before, with the public of journalists also standing in every area of the theatre.
Even though it seems incredible this is the first award given to the Consorzio del Brunello in 45 years of activity so receiving it was enormously exciting, as was going on stage of the Teatro del Gusto del Gambero Rosso. A mythical place! These were the winners: for production Pastificio Luca from Corte Croera (BL) the highest in Italy at 1450 metres above sea level in Cadore.

For communication the prize went to Oscar Farinetti from Eataly. For historical restaurants there were 2 winners with 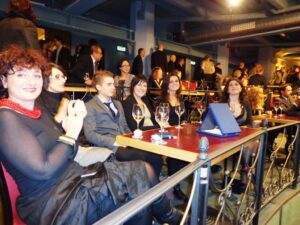 equal merits: Filippino in Lipari since 1910 and Sibilla in Tivoli run by the same family since 1730.

The Consorzio del Brunello was awarded as “institution who works in the defence of Italian food values”. An award well deserved in view of the amount of work in communication carried out and also in view of the number of events which have made Brunello become one of the best ambassadors for Italy around the world.