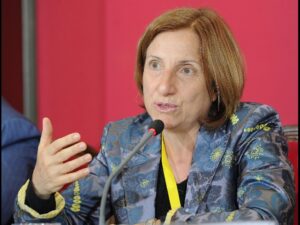 The Casato Prime Donne award 2012 has been assigned to Maria Carmela Lanzetta as an example of new femininity and civil commitment able to create involvement. The Mayor of Monasterace Ms. Lanzetta has had her family chemists shop set fire to, she has had her car shot at and has been threatened several times, but she has accepted to maintain her role in defence of legality and her fellow citizens. The quotation for Montalcino that Maria Carmela Lanzetta has written in the occasion of the award depicts her positive personality, her constant dedication to others and her love for the Calabria and Tuscany regions.

<< Our eyes, astonished by the sea-colours of our native land and by the cypresses that sail upon the harmonious waves of Tuscan hills. To journey into their infinite perspective and to think of the Beauty of the Landscape to be cared for and of the Women to be protected from daily violence>>

The message will remain in the Brunello vineyards at Casato Prime Donne, the winery which o rganizes the award and 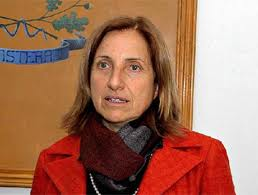 the first in Italy to have an all female staff. Year after year the winners’ quotations are engraved on travertine monuments and positioned along a meditation path. Those walking along this trail will also find pieces of contemporary art created by young Tuscan artists. These objects are large in size and are connected with the area. Works of art which are well integrated and comments the landscape according to the poetic expressions of the “art of landscape”.
For Maria Carmela Lanzetta’s message the work of art is by Marco Pignattai and is made up of a life size profile of a chianina ox made in reflecting stainless steel. This is the second version of this animal that was originally made in travertine by the same artist.
It has been named “Ardita” (bold) a name which is particularly apt to accompany the message from the Mayor of Monasterace. 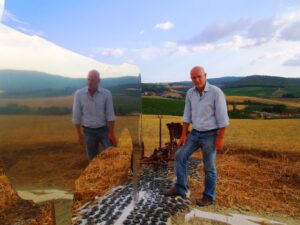 Maria Carmela Lanzetta is a pharmacist, mother and wife, dedicated to politics, quite a hero by chance, who has found courage and maintained her position as mayor regardless of the attacks and threats. This has solicited solidarity and consensus from the National institutions but most of all from her fellow citizens. So, from her civil commitment come a sort of movement rebelling against illegality which transforms this young mayor of Monasterace into a symbol of hope and rebirth for the territories where respect for rules usually applied in a “normal” place involve sacrifice and risks.

The jury of the Casato Prime Donne award – Francesca Cinelli Colombini, Rosy Bindi, Anselma Dell’Olio, Anna Pesenti, Stefania Rossini, Anna Scafuri and Daniela Viglione – have chosen Mayor Lanzetta because she has the values which make women the engine of a growing society and of a devolving economy: culture, commitment, courage and ability to get involved. During the years this ward has 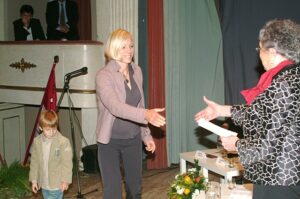 emerged because of the alternative and innovative female roles proposed, like Samantha Cristoforetti, the astronaut, only European woman to go into space in 2014 or like the Olympic winner Josefa Idem who has proven that agonist sport is not just for the young.

From the award and the winery Casato Prime Donne consequently comes a message of hope for the future and for the role that women can have in its making.